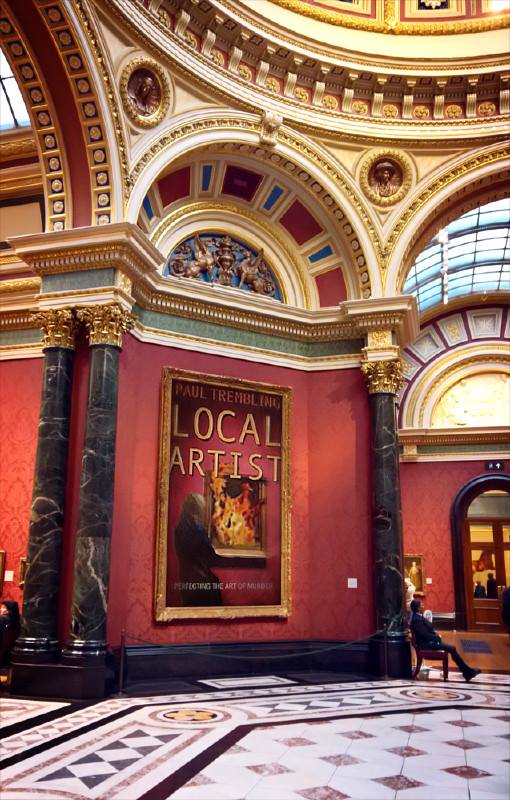 WELCOME TO THE LOCAL ARTIST PAGE!

(My thanks to JEAN GILL for the pictures above!


If you want to hear my on-line interview about Local Artist (courtesy of 'The Author Show') click on the picture or follow this link:
https://www.youtube.com/watch?v=W8Y-fk3AK7w&feature=youtu.be

Or to read a taster, carry on down...

We went back down the stairs and across to the other side of the Library.

At one time there had been a little alcove here, which had been kept free of books to provide space for readings, workshops and exhibitions. Now there was a rather grand set of sliding doors where the wall had been: pale wood, nicely grained and polished, surmounted by a neat brass plaque announcing it to be 'The Laney Grey Memorial Wing'. Very fitting – our famous local poet had been a regular user of the alcove before her tragic death. She would have loved the new room, though she'd have poked fun at the idea of a 'memorial wing'.

“I know. I was at the opening,” June reminded me.

“Oh yes, of course you were. Sorry, it was such a hectic day.”

June nodded, and moved closer to the door. “Was this here before, Sandra?” She pointed to a small mark just above the handle.

I looked at it and frowned. On closer inspection, the mark was a rounded indentation in the wood. “I don't think so. I don't remember seeing it before. Of course, it's all still quite new...”

“There's another one. Two more, in fact.” June indicated two places, one higher up than the first one, one further down. “Could be tool marks. But they're only on one side. If someone had pushed a screwdriver in and tried to lever the doors open, you'd expect to see marks on both sides.”

I shook my head. “I suppose they might have been there before. I just haven't noticed them. Might have been something done when they were made. A local company donated them free, so we weren't going to be overly critical.”

“I'll have a closer look with the doors open.” June tugged on the handle with her gloved hand. “Still seems secure, so I doubt if anyone got in. Burglars don't usually lock up behind themselves!”

“Actually, they wouldn't have to,” I said. “These doors are on an automatic system. They detect movement in and out. After thirty minutes, if nobody goes through, they automatically close and lock themselves. It's a security feature, to stop them being left open by accident. Of course, you can lock them open permanently, but you need to put in a different code.”

“Yes – a bit over the top for a Library, but I think the manufacturers were getting the maximum publicity out of it. They made a big thing about all the features, we’ve been in trade magazines all over the world, apparently.”

“Who knew the codes?”

“All the Library staff, of course. The manufacturers, I suppose. I can't think of anyone else who would have had them.”

PC Newbold spoke up. “Have you seen this, Sarge?” He was pointing his torch into the corner, where the beam highlighted a small pale object.

“Cigarette end? Good spot, Mike. You don't have anyone smoking in here, do you Sandra?”

I shook my head firmly. “Of course not!”

“Good! Could be our burglar, then.” She crouched down for a closer look, and sniffed. “No sign of burning on the carpet, no smell of smoke. But it hasn't been stubbed out, either. Burnt down to the filter. Curious.”

“Might have been walked in on someone's shoe?” Mike suggested.

“Doesn't look crushed.” June stood up again. “We'll leave it for CSI to collect and send in for DNA. I'll try and get them to come as soon as possible, Sandra, to minimise the disruption, but they don't start until eight, so I'm afraid you'll probably have to stay closed for the morning at least.”

“That'll be a disappointment for the Art Club, but I'm sure they'll understand. We can re-arrange things, I suppose.”

“Thanks, that would be helpful. We'd better check the exhibition, just to be thorough. How do we get in?”

I flipped open a discrete panel next to the doors, revealing a keypad. “This looks OK. Shall I go ahead and open it?”

“Let me do it.” June stepped over. “I don't think they can get fingerprints off this surface, but no harm in being careful.” She poised a gloved finger over the numbers. “What's the code?”

June punched in the numbers as I spoke them. The lock disengaged with a distinct click and the doors slid smoothly open, the lights coming on as they did so.

In order to maximise display space, the new wing had been designed without windows. Instead, the curving roof was all toughened glass, to give the biggest possible amount of natural light – with discrete lighting to give the same effect at night.

The lighting had been another contribution from a local company, and it worked perfectly. Every display stand, every painting and collage and sculpture was brilliantly illuminated, with no shadows to hide anyone's work. Even the empty display directly in front of the door was bright and distinct.

As was the man laying sprawled face down on the floor in a pool of red.