This year, I've been very been very resolute and managed to keep the list to just five.  The difficulty was deciding which five, since I've read and enjoyed a lot more than that!

Being an Independent Author myself, I naturally read a lot of books from other 'Indies'.  The whole Independent (or Self Published) author phenomenon has attracted a lot of criticism for flooding the market with poorly written and badly edited books.  Sadly, there is a lot of justification for that.  But it is also true that there are a lot of excellent Indie writers, who put in time, trouble and talent to produce books that easily match the best that the mainstream publishers can put out - and even exceed them (In My Humble Opinion!).  I'm pleased to be able to say that I know some of the best of them, if only as on-line friends: but I would be recommending these books even if I'd never heard of them before in my life!

However, this doesn't mean that I only read 'Indies', and my list includes two 'mainstreamers' (to invent a suitable word).  One of them was even an actual, paper-and-ink traditional book, not an e-book!

So read my Amazon reviews, click the cover to link to the book, and enjoy some good reading in 2014.

BEDLAM by B A Morton.
​
I had the privilege of reading this in a pre-publication version. Having read several of the author's previous works, I expected to be good - and I was not disappointed! In fact, I thought it was absolutely brilliant! A terrific concept, wonderfully carried out.

It's incredibly well crafted, finely balanced between a gritty police drama and a surrealistic supernatural fantasy - and that is what takes you right into the mind of the main character, who is himself struggling to understand what is and is not real. Keeping the reader involved whilst still maintaining that intentional confusion is a very difficult trick, but Morton pulls it off so well that I didn't even notice it happening. Instead I was totally absorbed by the pace, the tension and the mystery.

The previous time I reviewed a book by this author I said it was the best thing she'd written: now I have to say it again! 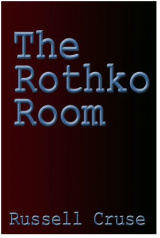 THE ROTHKO ROOM by Russell Cruse.

When reading this book, it might be useful to have an interest in crossword puzzles. A detailed knowledge of music would also come in handy, as well as some understanding of modern art. However, if you lack any of these things, don't despair. I have none of them, and still thoroughly enjoyed this story.

The one thing that is essential is a sense of humour, because (for me at least) 'The Rothko Room' is a brilliantly executed exercise in (to put it politely) extracting the Michael. It's main target is the Spy Story genre, though the author does take a few well aimed shots at other targets as well, such as the Government, the British Establishment, Art, and so on. Like all good parodies, it works very well as a story, with all the elements of the classic spy thriller - the ruthless killers, the ultra secret organization, the complex and devious plot. But Cruse has laced it with a deliciously subtle and cunning humour so that every twist in the story brings with it another reason to grin, snigger, or even laugh out loud.

I did have some small problems with it. In one or two places I lost track of the conversation and wasn't entirely sure who was saying what. But this was a very minor problem, and didn't spoil my enjoyment of one of the best books that I've read this year. 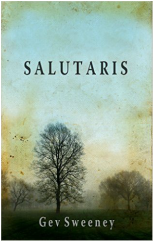 For one thing, unless I missed it somehow, the word vampire is never actually used! That the central character is a vampire is something that is inferred, implied, suggested - but not actually said.

And in fact there is a great deal in the story that is not actually spelled out It has a mystical atmosphere: things happen which aren't quite explained, characters appear who may be more than they seem. If this leaves the reader feeling slightly bemused, then all the better to identify with the main character, John Hance, who is himself struggling to understand what is happening to him.

Hance is brilliantly conceived. A musician, a teacher, a priest, he is spared the blood-lust of his nature by a quite ingenious means (that I will not spoil the surprise of by revealing!) Tormented by pain and wracked with guilt over events that took place two hundred years ago, he finds solace only in his music. Until Emmy comes into his life, and things begin to change.

The details of that change I'll leave to you to find out. I'll simply say that it seemed to me that this was not a story about vampires at all but about human beings: about their how the past can cripple us, and about how redemption can find us. And it is one of the most marvelously conceived and beautifully written stories I have read. 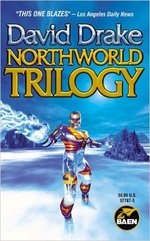 (Cheating a little here, since this is actually three books in one. But I got it as one volume, so that's close enough!)

I was particularly interested in the afterword at the end of each book of this omnibus edition , where the author explains how each one was inspired by some of the ancient Icelandic poetic sagas. This may explain some of the loose ends and unresolved plot lines, which I found frustrating, yet contribute to the mythic quality of the stories. Or perhaps not!

But in any case, the sheer pace and excitement of the writing didn't leave me much opportunity for ruminating on the background - that only came in retrospect. Drake is one of the foremost writers of military SF, and these books show his talents in full flow. The battle scenes are many, from individual combat to massed battles, and involve a variety of exotic weaponry - but they focus on the warriors themselves, not on the hardware. The stories are cleverly structured, and Drake uses the background of multiple linked worlds where 'duration' is not always a relevant concept to show his main characters following different adventures apparently at the same time. Hard to describe, but he pulls it off very well, and I loved the way he resolved and integrated the different strands.

The characters themselves are well developed, complex and believable, even when doing some unbelievable things. But then, some of them are gods - or, more accurately, human beings with god-like powers. The result of that tension between human nature and unlimited capability is the intriguing and profound underlay beneath the stories. But you don't have to go there. Just enjoy the action.

The depiction of Victorian life is incredibly rich and detailed, the plot is deep and complex, and the characters are wonderfully well drawn.

The lesbian love affair at the centre of the story may be off putting to some, but I found myself so much in sympathy with the characters, and all they went through, that I could only be glad at the outcome.

(I read this in the paperback version as pictured, and that's where the link leads, but it is also available for Kindle and, I would suppose, on other platforms as well).
So that's my Top Five for 2013.  But I've read so many other good books over the year that I must at least give honorable mentions to a few.  So for tense and gruesome horror, take a look at 'Offshore', by Lucy Peperdine.  Or for a humorous and touching look at school life (from the teacher's point of view), try 'Being Miss' by Fran Hill.  M.A. Mcrae is another very talented Independent author: her book 'Not a Man' (first of a trilogy) is a challenging and powerful look into other cultures and other lives.

I could keep going.  But there's 2014's reading to get into, and it's looking good!  I'm already reading what looks like being my first choice for the next list of Top Reads!