Santa took another deep drink from his ever-lasting mug of coffee.  “Right then. One more and we’ll knock off for lunch.  So who’s next Wee?”

Santa raised an eyebrow.  “One chicken?  I thought we sent them three last year!”  He had a remarkable memory for such detail.  “What happened?”

“A fox happened!”  Wiss, Elf in charge of Christmas Past (Statistics) informed them.  “Two of the chickens vanished with a ‘cluck’ and a cloud of feathers – so did the two replacements they bought!”

“Right!”  said Santa decisively.  “Cross the fox off the list – he’s had his presents!  And what would the remaining chicken like?”

The Elves exchanged glances.  “Lifting the ban on fox-hunting?” one of them suggested.

Santa shook his head.  “We stay out of politics,” he said firmly.  “Give her some extra grain, she won’t know the difference.  What about the dog?  Good dog or bad dog?”

“Depends,”  answered Shu, (Head of Pet Behaviour).  “On whether or not they’re asking him to do something or to stop doing something.  Averages out about equal.”

“Deserves a bone, then,” decided Santa. “Now the difficult ones.  Youngest Boy?”

“That’s Andy,” said Amer (Junior Boys).  “Went up to a new school this year and is doing very well there.  Working hard on his piano lessons – passed some exams and he’s played in the youth worship group!   Downside – tried to break his record for the distance he could jump from the trampoline.”

“Broke his wrist instead.”

Santa chuckled.  “Boys being boys…  what does he want?”

“Lot’s of things.  But the consensus is for a mobile phone.”

Rye (Senior Boys), scrolled down his screen. “Matthew.  Also doing very well at school.  Quite active in the drama group – had a part in ‘Joseph’ this year and is in the next school production as well.  Showing a lot of talent in music – not only with playing the guitar, but he’s learning the keyboard as well!  On the other hand – he’s driving his Mum wild by pinching her laptop all the time.  So, whatever he wants, she wants him to have one of his own!”

Santa nodded.  “That makes it an easy one for us.  So then - the eldest lad?”

Quist (Young Adults) stood up.  “That’s Tom.  Third year of Uni, working hard  (when he’s not on the beach), seems to be doing well, usually calls home if he needs help or money.  Splashed out on a car earlier this year, which is now filling up his parents drive whilst awaiting repair.”

“Car repair manual for him then.  And the parents?”

Muss,  Elf-In-Charge of Parental Analysis stood up.  “Mum is Annie – very busy lady: not only is she Mum, but she’s also Deacon Annie, with responsibilities for two churches and youth work.  Big year for her, as she was officially ordained this summer.  And apart from all that, she was very involved in organising a visit of young people from Rwanda.  Which unfortunately didn’t happen, due to some red-tape over visa’s, but a lot of the work had already been done by then!”

“She’s getting one.  Sort of.  She’s been in hospital for an operation, and now she’s forbidden to do anything until Christmas!”

“Ouch!  She’ll find that tough!”  mused Santa, remembering times when he’d tried to tell Mrs Claus not to do something – let alone not to do anything.  “Best thing for her is to get lots of TLC from everyone.  And chocolates.  So finally – what’s Dad been up to?”

“Still working as a CSI for Notts. Police.  Future’s a bit uncertain, with budget cuts and all… but he has managed to keep a New Year Resolution for the first time in his life!  He’s published a crime novel!”

“Very enterprising of him.”  Santa commented.  “What’s it called?”

Santa snorted.  “Oh, so he wants me to do his marketing for him, eh?  Well, he’ll have to learn that writing it is only half the story – so to speak.  Send him a book on Sales Techniques.  Better yet, send him the link, he can download it himself.  Now then – is that all of them?”

There was a chorus of agreement.  Santa yawned, pushed back his chair and stood up.  “Right, we’ll call it a day.  See you tomorrow – Wee, Wiss, Shu, Amer, Rye, Quist, Muss!” 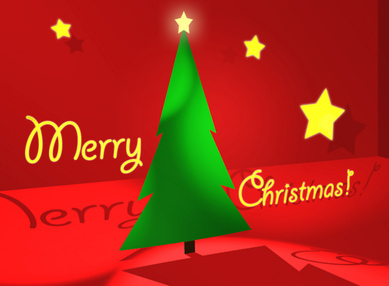 The Author with his new book!  (Actually, his only book!)
Download a Kindle copy from Amazon.co.uk http://www.amazon.co.uk/Can-of-Worms-ebook/dp/B005K8HQKE/ref=pd_rhf_ee_p_t_1 or order a paperback from Lulu.com http://www.lulu.com/spotlight/paultrembling 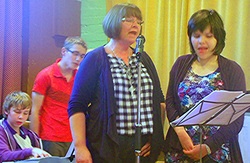 Andy accompanies her ‘single handed’ – due to his broken right arm (note the sling)! 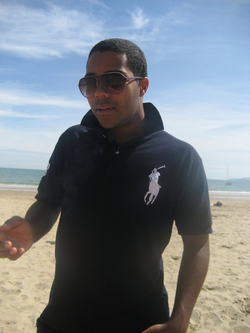 It's not easy being Cool in Bournemouth.