Draft Shooting Script. (With apologies to The Vicar of Dibley).
(Trembling Family News 2010).

2.       INTERIOR, STUDY, DAY.  Annie is on the phone.
ANNIE
Yes, OK, I’ll do that then…. Yes, send me that if you would.  Bye!
Paul enters.
ANNIE
That’s another funeral they’ve asked me to do because they couldn’t get anyone else! The lady at the undertakers calls me her angel, since I keep helping them out!
PAUL
So that would make you ‘The Angel of Death’ then?  The ‘Deadly Deacon?’
ANNIE (coldly).
When are you going to work?
PAUL
Late shift today, love.  I’m hoping it might be a bit quieter. I’ve got some statements to finish off.   All in all, it’s been an eventful year – Murders, Arsons, Sudden Deaths, as well as all the usual burglaries and car crime.  Though perhaps not as eventful as your year!
ANNIE
You mean the trip to Rwanda?  That was quite an experience.  Seeing how people are coming to terms with everything that happened in the genocide – that’s something that will stay with me.  There was the retreat on Iona as well.  That was a very special time for me.  Oh, and speaking of special times….. since you’re on late shift, how about you having some special time with the dog?  I won’t get chance to walk him today!
PAUL
OK, my Angel – whatever you say….

3. INTERIOR, MATT’S BEDROOM, DAY.
A typical messy teenagers bedroom.  Matt is playing his guitar.  Paul enters.
PAUL
That’s coming on well, Matt.  Considering that it’s only been a few months since you started lessons, you’re doing pretty good.
MATT
Well, I did get some good tips from Tom before he went back to Uni.  That helped.
PAUL
Come to think of it, you’ve been involved in a lot of things in the last year. Drama – basketball….. wouldn’t care to add some dog-walking to your list of useful skills, would you.
MATT
Ah – no thanks Dad.     I’m a bit busy just now….
PAUL
(Sighs)  OK, just a thought…..

4.  INTERIOR, ANDY’S BEDROOM, DAY. A bit tidier than Matt’s bedroom.  But not
much.  Andy is playing on his keyboard.  Paul enters.
ANDY
Hi, Dad – can you listen to me playing?
PAUL
OK – just for a few minutes.  Andy plays while Paul listens.
PAUL
Yes, you’re doing really well on that.  (picks up papers).  And I see you’ve done some more drawings.  They’re pretty good, too.
ANDY
Thanks, Dad.  Will you play with me on the X-box?
PAUL
Not just now.  You always beat me, anyhow!  But the dog needs walking.  I don’t suppose you want to take him?
ANDY
Ah – no thanks Dad.  No offence – but I’ve got some homework to do…
PAUL
Homework on the X-box?  Oh, never mind!

5.  INTERIOR, HALLWAY, DAY.
Paul comes downstairs as Annie comes out of the study, with phone.
ANNIE
Tom just called.  The course is going well, but he wants a recipe for chilli and can we pick him up from Bournemouth for Christmas?   You’re off that day, so I’ve said yes – we’ll go together and share the driving.
PAUL
OK, well it’s a day out, I suppose! (Enter the dog, whining).  OK Blaze, we’ll go now.  (Phone rings).   You’d better get that – it might be the undertakers wanting the Angel!
ANNIE
(Nearly tripping over Blaze).  You just get going with that dog! (Answers phone)
Hello, Angel of – I mean, Annie Trembling!


7.  INTERIOR, LIVING ROOM, NIGHT.
Paul and Annie are sitting on the couch with mugs of coffee.
PAUL
So this man gets a phone call from his doctor, who tells him “I’m afraid that I’ve got some bad news – and some very bad news.”
“OK”, says the man.  “Tell me the bad news first.”
“Well – your test results are back and you’ve only got twenty-four hours to live!”
The man was really shaken. “Doctor – that’s terrible – what news could  possibly be worse than that?”
The Doctor answers “Um – well – the worse news is that I forgot to call you yesterday!”  Paul laughs, Annie doesn’t.
ANNIE
That’s terrible.  How could a Doctor be so careless?  I hope he was reported for it!
PAUL (stops laughing).
Annie – it’s a joke. 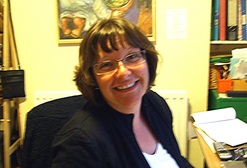 Annie in her office. 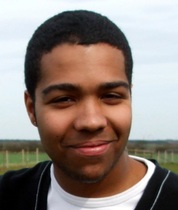 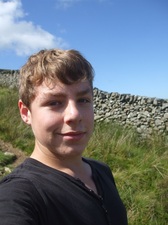 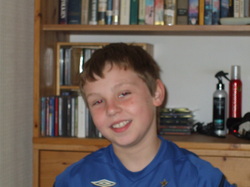 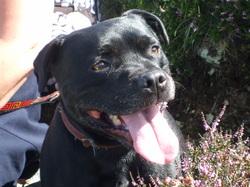